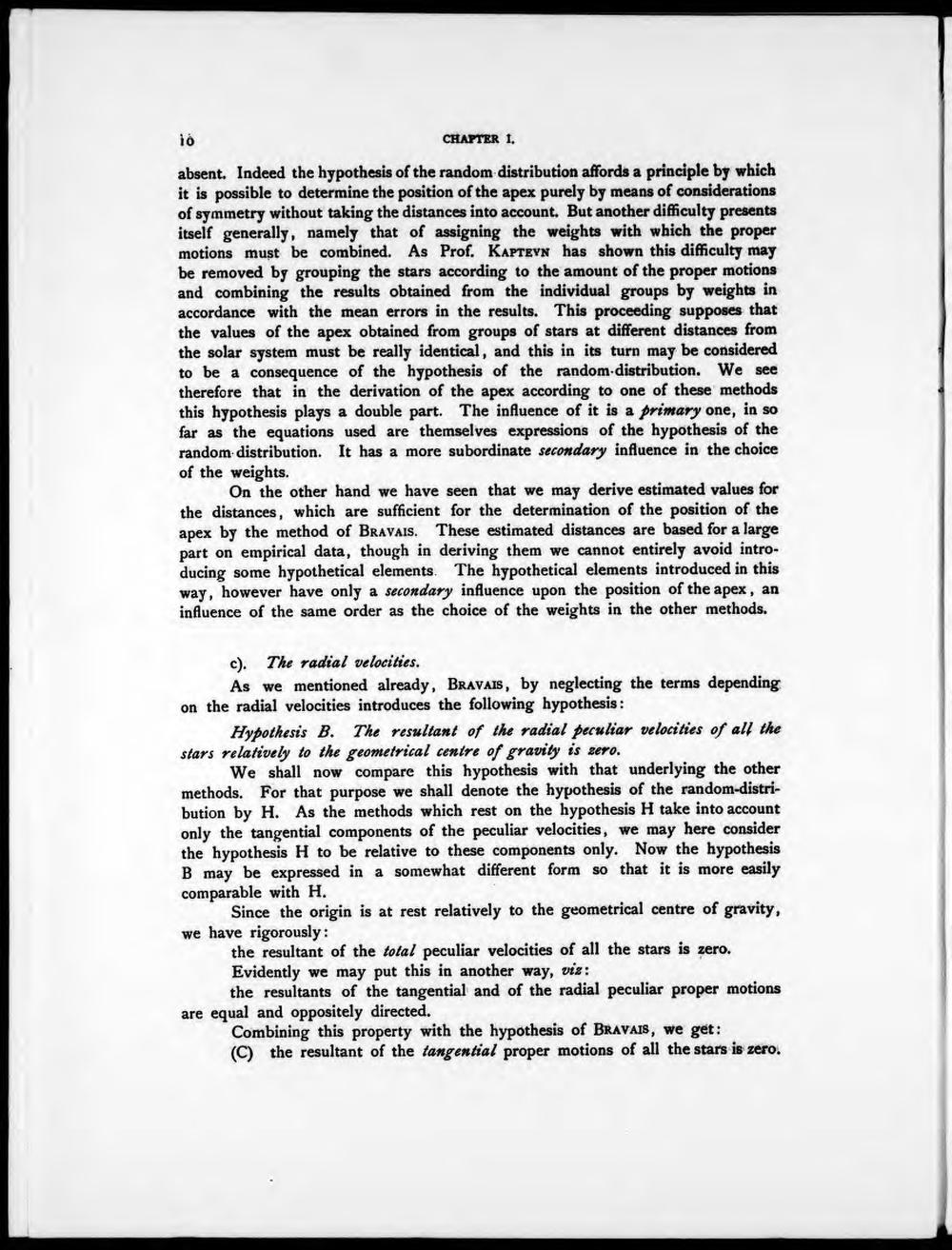 absent. Indeed the hypothesis of the random distribution affords a principle by which it is possible to determine the position of the apex purely by means of considerations of symmetry without taking the distances into account. But another difficulty presents itself generally, namely that of assigning the weights with which the proper motions must be combined. As Prof. Kapteyn has shown this difficulty may be removed by grouping the stars according to the amount of the proper motions and combining the results obtained from the individual groups by weights in accordance with the mean errors in the results. This proceeding supposes that the values of the apex obtained from groups of stars at different distances from the solar system must be really identical, and this in its turn may be considered to be a consequence of the hypothesis of the random-distribution. We see therefore that in the derivation of the apex according to one of these methods this hypothesis plays a doublé part. The influence of it is a primary one, in so far as the equations used are themselves expressions of the hypothesis of the random distribution. It has a more subordinate secondary influence in the choice of the weights.

On the other hand we have seen that we may derive estimated values for the distances, which are sufficiënt for the determination of the position of the apex by the method of Bravais. These estimated distances are based for a large part on empirical data, though in deriving them we cannot entirely avoid introducing some hypothetical elements The hypothetical elements introduced in this way, however have only a secondary influence upon the position of the apex, an influence of the same order as the choice of the weights in the other methods.

As we mentioned already, Bravais, by neglecting the terms depending on the radial velocities introducés the following hypothesis:

Hypothesis B. The resultant of the radial peculiar velocities of all the stars relatively to the geometrical cenlre of gravity is zero.

Since the origin is at rest relatively to the geometrical centre of gravity,

the resultant of the total peculiar velocities of all the stars is zero.

Evidently we may put this in another way, viz:

the resultants of the tangential and of the radial peculiar proper motions are equal and oppositely directed.

Combining this property with the hypothesis of Bravais, we get:

(C) the resultant of the tangential proper motions of all the stars is zero.