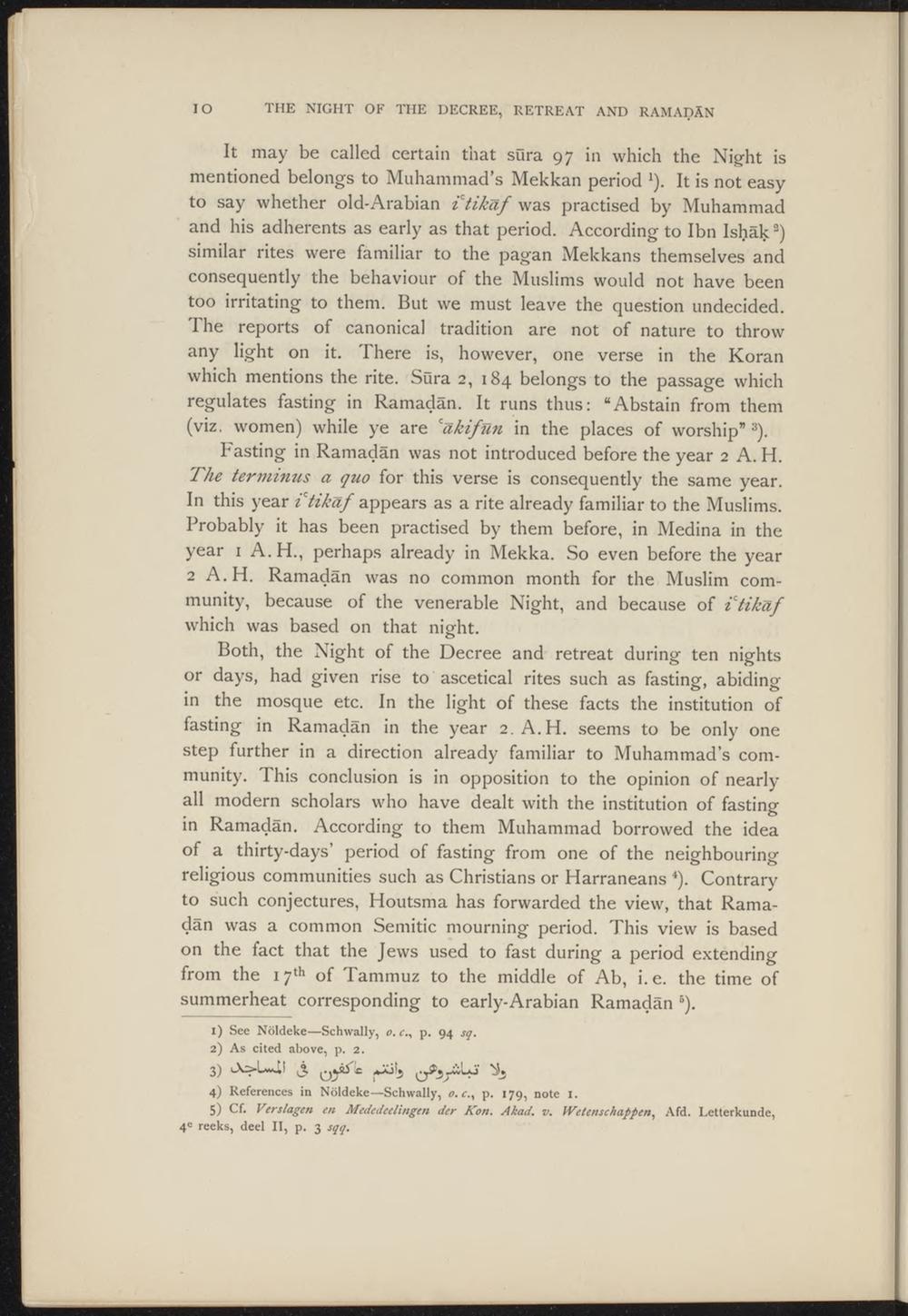 It may be called certain that süra 97 111 which the Night is mentioned belongs to Muhammad's Mekkan period x). It is not easy to say whether old-Arabian t tikaf was practised by Muhammad and his adherents as early as that period. According to Ibn Ishak3) similar rites were familiar to the pagan Mekkans themselves and consequently the behaviour of the Muslims would not have been too irritating to them. But we must leave the question undecided. The reports of canonical tradition are not of nature to throw any light on it. There is, however, one verse in the Koran which mentions the rite. Süra 2, 184 belongs to the passage which regulates fasting in Ramadan. It runs thus: "Abstain from them (viz, women) while ye are cakifün in the places of worship"3).

Fasting in Ramadan was not introduced before the year 2 A. H. The terminus a quo for this verse is consequently the same year. In this year zctikaf appears as a rite already familiar to the Muslims. Probably it has been practised by them before, in Medina in the year 1 A.H., perhaps already in Mekka. So even before the year 2 A.H. Ramadan was no common month for the Muslim community, because of the venerable Night, and because of t tikaf which was based on that night.

Both, the Night of the Decree and retreat during ten nights or days, had given rise to ascetical rites such as fasting, abiding-

in the mosque etc. In the light of these facts the institution of fasting in Ramadan in the year 2. A.H. seems to be only one step further in a direction already familiar to Muhammad's community. This conclusion is in opposition to the opinion of nearly all modern scholars who have dealt with the institution of fasting in Ramadan. According to them Muhammad borrowed the idea of a thirty-days' period of fasting from one of the neighbouring religious communities such as Christians or Harraneans 4). Contrary to such conjectures, Houtsma has forwarded the view, that Ramadan was a common Semitic mourning period. This view is based on the fact that the Jews used to fast during a period extending from the 17* of Tammuz to the middle of Ab, i.e. the time of summerheat corresponding to early-Arabian Ramadan 5).