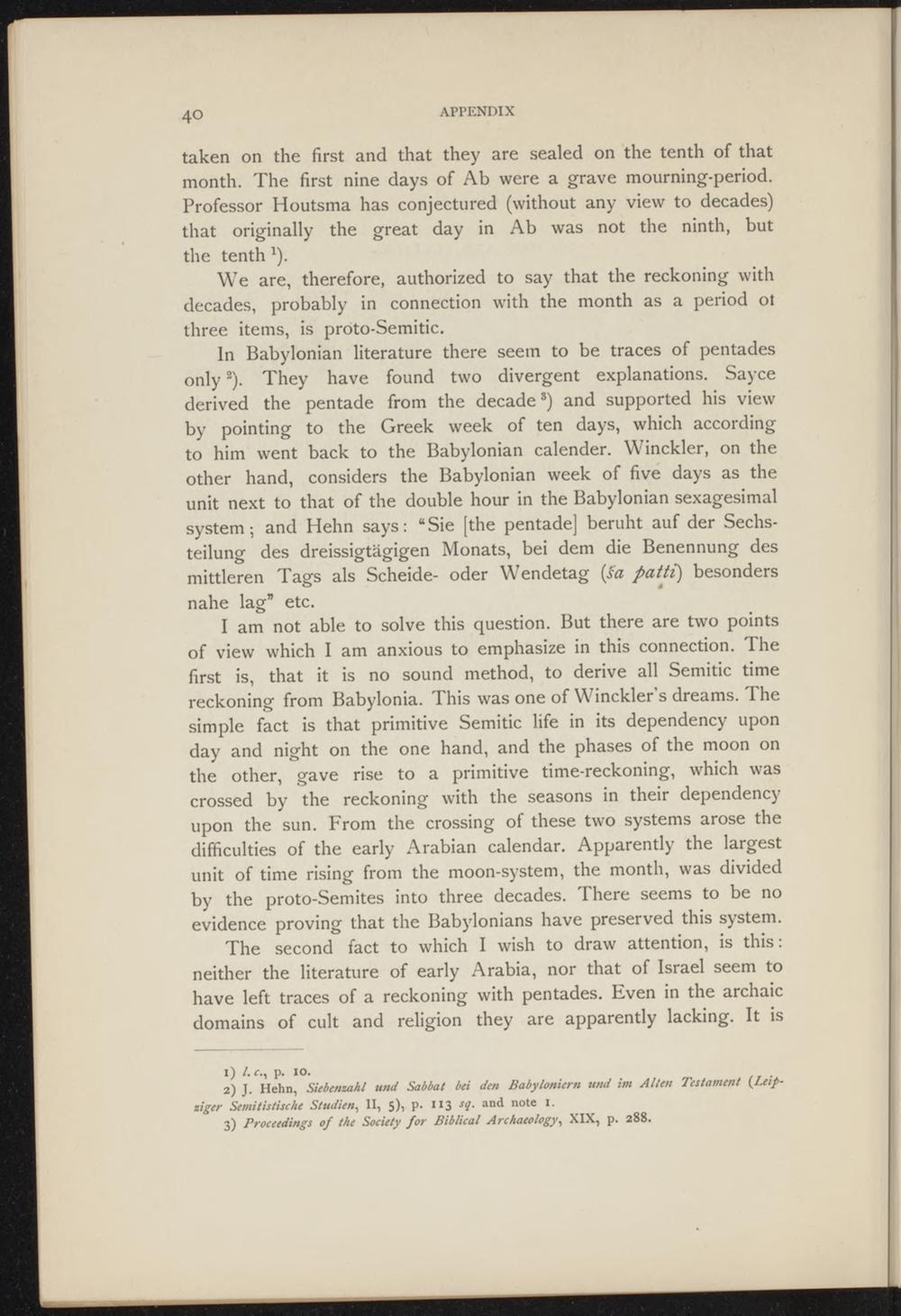 taken on the first and that they are sealed on the tenth of that month. The first nine days of Ab were a grave mourning-period. Professor Houtsma has conjectured (without any view to decades) that originally the great day in Ab was not the ninth, but the tenth 1).

We are, therefore, authorized to say that the reckoning with decades, probably in connection with the month as a period ot three items, is pröto-Semitic.

In Babylonian literature there seem to be traces of pentades onlys). They have found two divergent explanations. Sayce derived the pentade from the decade8) and supported his view by pointing to the Greek week of ten days, which according to him went back to the Babylonian calender. Winckler, on the other hand, considers the Babylonian week of five days as the unit next to that of the doublé hour in the Babylonian sexagesimal system; and Hehn says: "Sie [the pentade] beruht auf der Sechsteilung des dreissigtagigen Monats, bei dem die Benennung des mittleren Tags als Scheide- oder Wendetag (sa patti) besonders nahe lag" etc.

I am not able to solve this question. But there are two points of view which I am anxious to emphasize in this connection. The first is, that it is no sound method, to derive all Semitic time reckoning from Babylonia. This was one of Winckler's dreams. The simple fact is that primitive Semitic life in its dependency upon day and night on the one hand, and the phases of the moon on the other, gave rise to a primitive time-reckoning, which was crossed by the reckoning with the seasons in their dependency upon the sun. From the crossing of these two systems arose the difficulties of the early Arabian calendar. Apparently the largest unit of time rising from the moon-system, the month, was divided by the proto-Semites into three decades. There seems to be no evidence proving that the Babylonians have preserved this system.

The second fact to which I wish to draw attention, is this. neither the literature of early Arabia, nor that of Israël seem to have left traces of a reckoning with pentades. Even in the archaic domains of cult and religion they are apparently lacking. It is

3) Proceedings of the Society for Biblical Archaeology, XIX, p. 288.