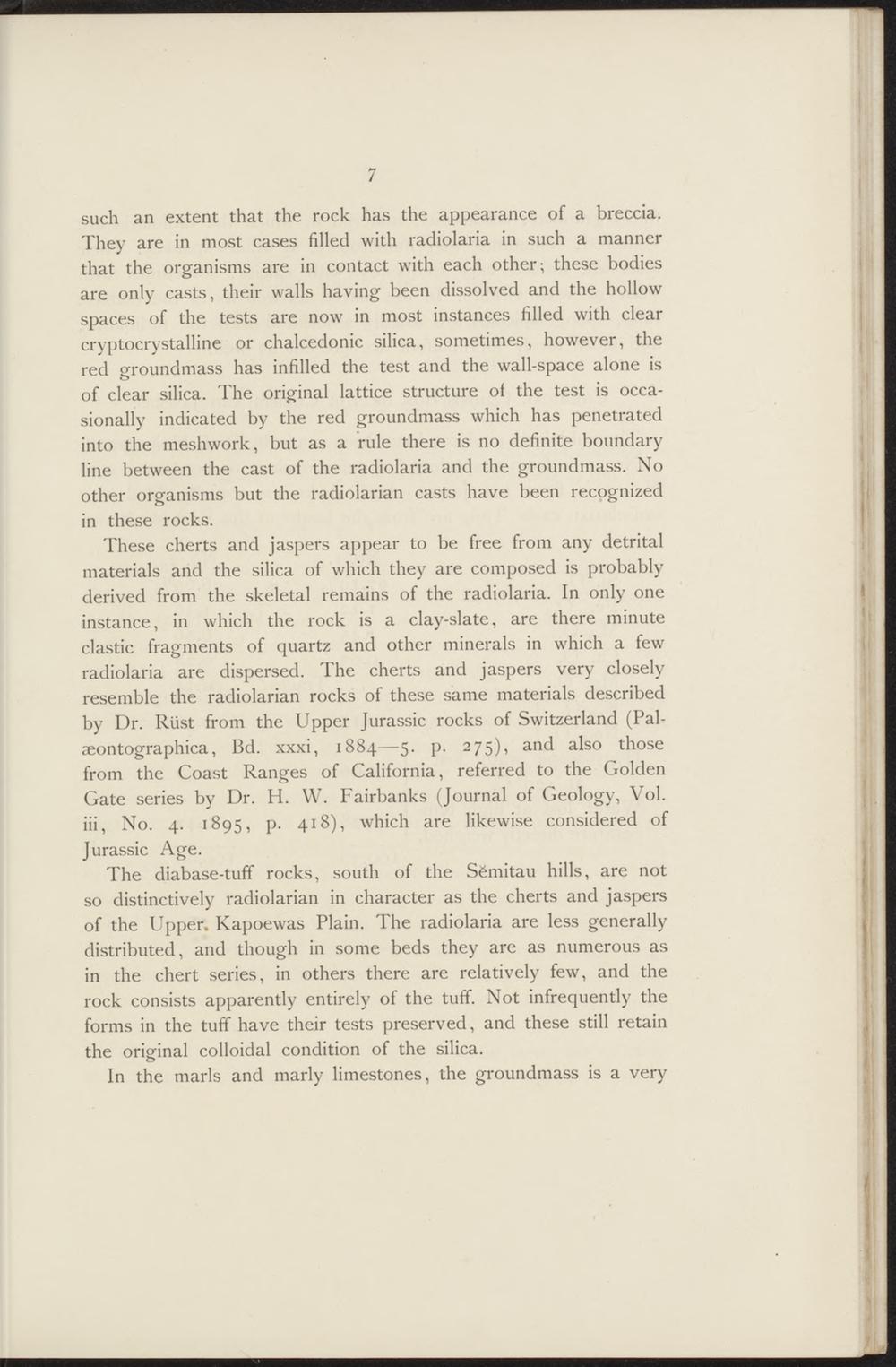 such an extent that the rock has the appearance of a breccia. They are in most cases filled with radiolaria in such a manner that the organisms are in contact with each other; these bodies are only casts, their walls having been dissolved and the hollow spaces of the tests are now in most instances filled with clear cryptocrystalline or chalcedonic silica, sometimes, however, the red groundmass has infilled the test and the wall-space alone is of clear silica. The original lattice structure of the test is occasionally indicated by the red groundmass which has penetrated into the meshwork, but as a rule there is no definite boundary line between the cast of the radiolaria and the groundmass. No other organisms but the radiolarian casts have been recognized in these rocks.

These cherts and jaspers appear to be free from any detrital materials and the silica of which they are composed is probably derived from the skeletal remains of the radiolaria. In only one instance, in which the rock is a clay-slate, are there minute clastic fragments of quartz and other minerals in which a few radiolaria are dispersed. The cherts and jaspers very closely resemble the radiolarian rocks of these same materials described by Dr. Rüst from the Upper Jurassic rocks of Switzerland (Palaeontographica, Bd. xxxi, 1884—5. p. 275), and also those from the Coast Ranges of California, referred to the Golden Gate series by Dr. H. W. Fairbanks (Journal of Geology, Vol. üi, No. 4. 1895, p. 418), which are likewise considered of Jurassic Age.

The diabase-tuff rocks, south of the Sëmitau hills, are not so distinctively radiolarian in character as the cherts and jaspers of the Upper. Kapoewas Plain. The radiolaria are less generally distributed, and though in some beds they are as numerous as in the chert series, in others there are relatively few, and the rock consists apparently entirely of the tuff. Not infrequently the forms in the tuff have their tests preserved, and these still retain the oripfinal colloidal condition of the silica.

In the marls and marly limestones, the groundmass is a very