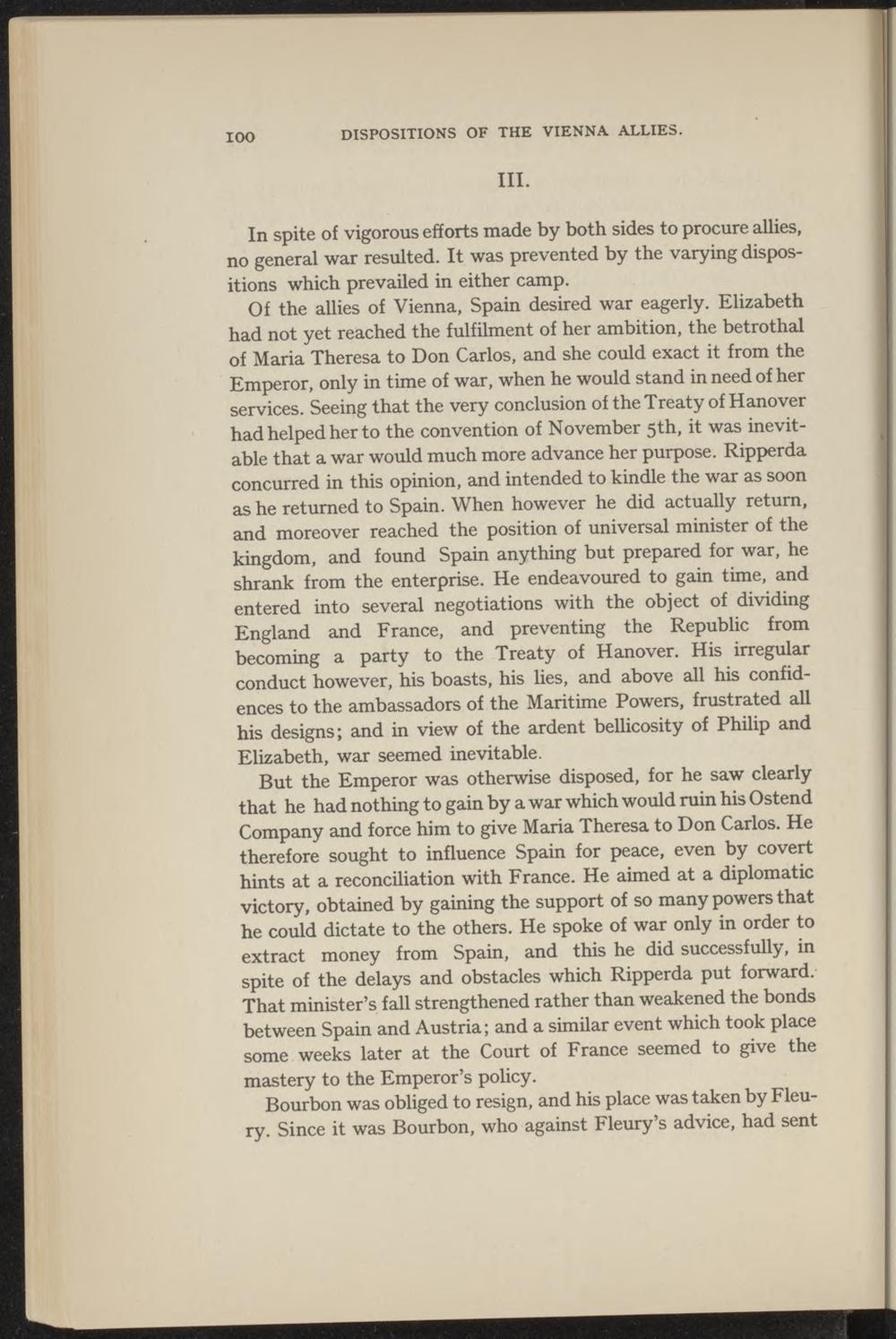 In spite of vigorous efforts made by both sides to procure allies, no general war resulted. It was prevented by the varying dispositions which prevailed in either camp.

Of the allies of Vienna, Spain desired war eagerly. Elizabeth had not yet reached the fulfilment of her ambition, the betrothal of Maria Theresa to Don Carlos, and she could exact it from the Emperor, only in time of war, when he would stand in need of her services. Seeing that the very conclusion of the Treaty of Hanover had helped her to the convention of November 5th, it was inevitable that a war would much more advance her purpose. Ripperda concurred in this opinion, and intended to kindie the war as soon as he returned to Spain. When however he did actually return, and moreover reached the position of universal minister of the kingdom, and found Spain anything but prepared for war, he shrank from the enterprise. He endeavoured to gain time, and entered into several negotiations with the object of dividmg England and France, and preventing the Republic from becoming a party to the Treaty of Hanover. His irregular conduct however, his boasts, his lies, and above all his confidences to the ambassadors of the Maritime Powers, frustrated all his designs; and in view of the ardent bellicosity of Philip and Elizabeth, war seemed inevitable.

But the Emperor was otherwise disposed, for he saw clearly that he had nothing to gain by a war which would ruin his Ostend Company and force him to give Maria Theresa to Don Carlos. He therefore sought to influence Spain for peace, even by covert hints at a reconciliation with France. He aimed at a diplomatic victory, obtained by gaining the support of so many powers that he could dictate to the others. He spoke of war only in order to extract money from Spain, and this he did successfully, in spite of the delays and obstacles which Ripperda put forward. That minister's fall strengthened rather than weakened the bonds between Spain and Austria; and a similar event which took place some weeks later at the Court of France seemed to give the mastery to the Emperor's policy.

Bourbon was obliged to resign, and his place was taken by Fleury. Since it was Bourbon, who against Fleury's advice, had sent