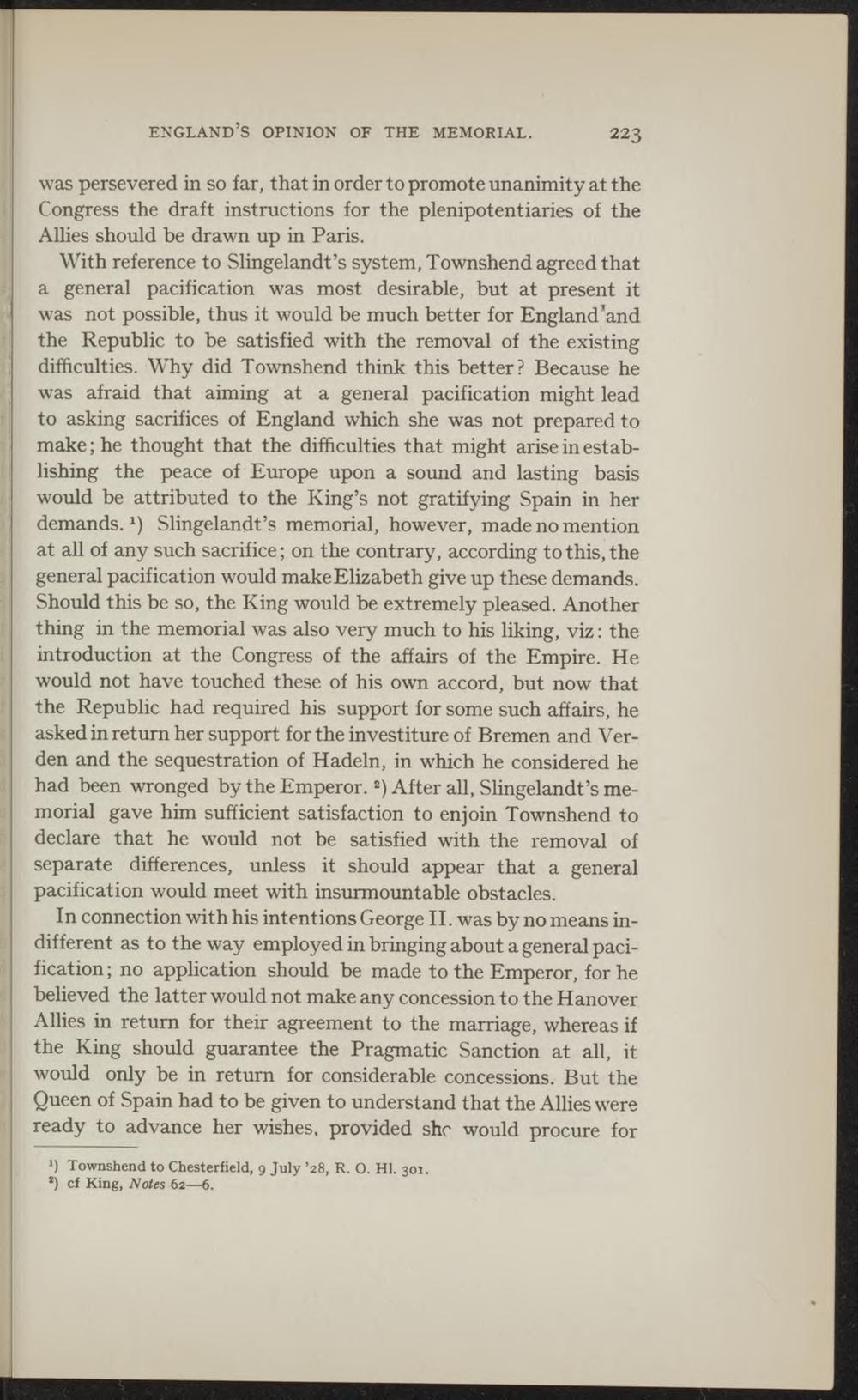 was persevered in so far, that in order to promote unanimity at the Congress the draft instructions for the plenipotentiaries of the Allies should be drawn up in Paris.

With reference to Slingelandt's system, Townshendagreed that a general pacification was most desirable, but at present it was not possible, thus it would be much better for England'and the Republic to be satisfied with the removal of the existing difficulties. Why did Townshend think this better? Because he was afraid that aiming at a general pacification might lead to asking sacrifices of England which she was not prepared to make;he thought that the difficulties that might arise in establishing the peace of Europe upon a sound and lasting basis would be attributed to the King's not gratifying Spain in her demands.*) Slingelandt's memorial, however, made no mention at all of any such sacrifice; on the contrary, according to this, the general pacification would makeElizabeth give up these demands. Should this be so, the King would be extremely pleased. Another thing in the memorial was also very much to his liking, viz: the introduction at the Congress of the affairs of the Empire. He would not have touched these of his own accord, but now that the Republic had required his support for some such affairs, he asked in return her support for the investiture of Bremen and Verden and the sequestration of Hadeln, in which he considered he had been wronged by the Emperor.2) After all, Slingelandt's memorial gave him sufficiënt satisfaction to enjoin Townshend to declare that he would not be satisfied with the removal of separate differences, unless it should appear that a general pacification would meet with insurmountable obstacles.

In connection with his intentions George II. was by no means indifferent as to the way employed in bringing about a general pacification ; no application should be made to the Emperor, for he believed the latter would not make any concession to the Hanover Allies in return for their agreement to the marriage, whereas if the King should guarantee the Pragmatic Sanction at all, it would only be in return for considerable concessions. But the Queen of Spain had to be given to understand that the Allies were ready to advance her wishes, provided shc would procure for