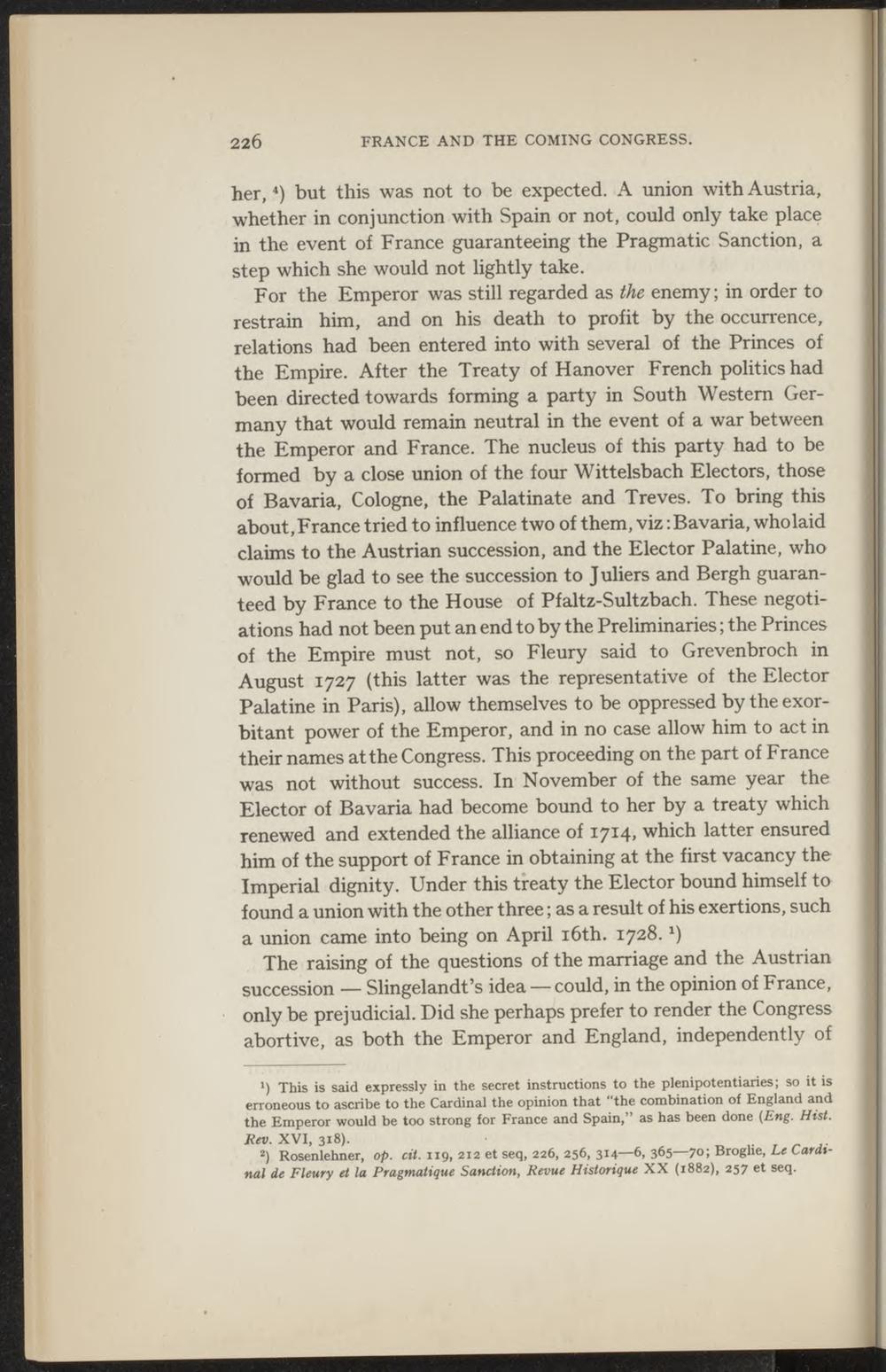 her,4) but this was not to be expected. A union with Austria, whether in conjunction with Spain or not, could only take place in the event of France guaranteeing the Pragmatic Sanction, a step which she would not lightly take.

For the Emperor was still regarded as the enemy; in order to restrain him, and on his death to profit by the occurrence, relations had been entered into with several of the Princes of the Empire. After the Treaty of Hanover French politics had been directed towards forming a party in South Western Germany that would remain neutral in the event of a war between the Emperor and France. The nucleus of this party had to be formed by a close union of the four Wittelsbach Electors, those of Bavaria, Cologne, the Palatinate and Treves. To bring this about,France tried to influence two of them, viz :Bavaria, wholaid claims to the Austrian succession, and the Elector Palatine, who would be glad to see the succession to J uliers and Bergh guaranteed by France to the House of Pfaltz-Sultzbach. These negotiations had not been put an end to by the Preliminaries; the Princes of the Empire must not, so Fleury said to Grevenbroch in August 1727 (this latter was the representative of the Elector Palatine in Paris), allow themselves to be oppressed by the exorbitant power of the Emperor, and in no case allow him to act in their names at the Congress. This proceeding on the part of France was not without success. In November of the same year the Elector of Bavaria had become bound to her by a treaty which renewed and extended the alliance of 1714, which latter ensured him of the support of France in obtaining at the first vacancy the Imperial dignity. Under this treaty the Elector bound himself to f ound a union with the other three; as a result of his exertions, such a Tin ion came into being on April ióth. 1728.

The raising of the questions of the marriage and the Austrian succession — Slingelandt's idea — could, in the opinion of France, only be prejudicial. Did she perhaps prefer to render the Congress abortive, as both the Emperor and England, independently of

*) This is said expressly in the secret instructions to the plenipotentiaries; so it is erroneous to ascribe to the Cardinal the opinion that "the combination of England and the Emperor would be too strong for France and Spain," as has been done {Eng. Hist. Rev. XVI, 318).