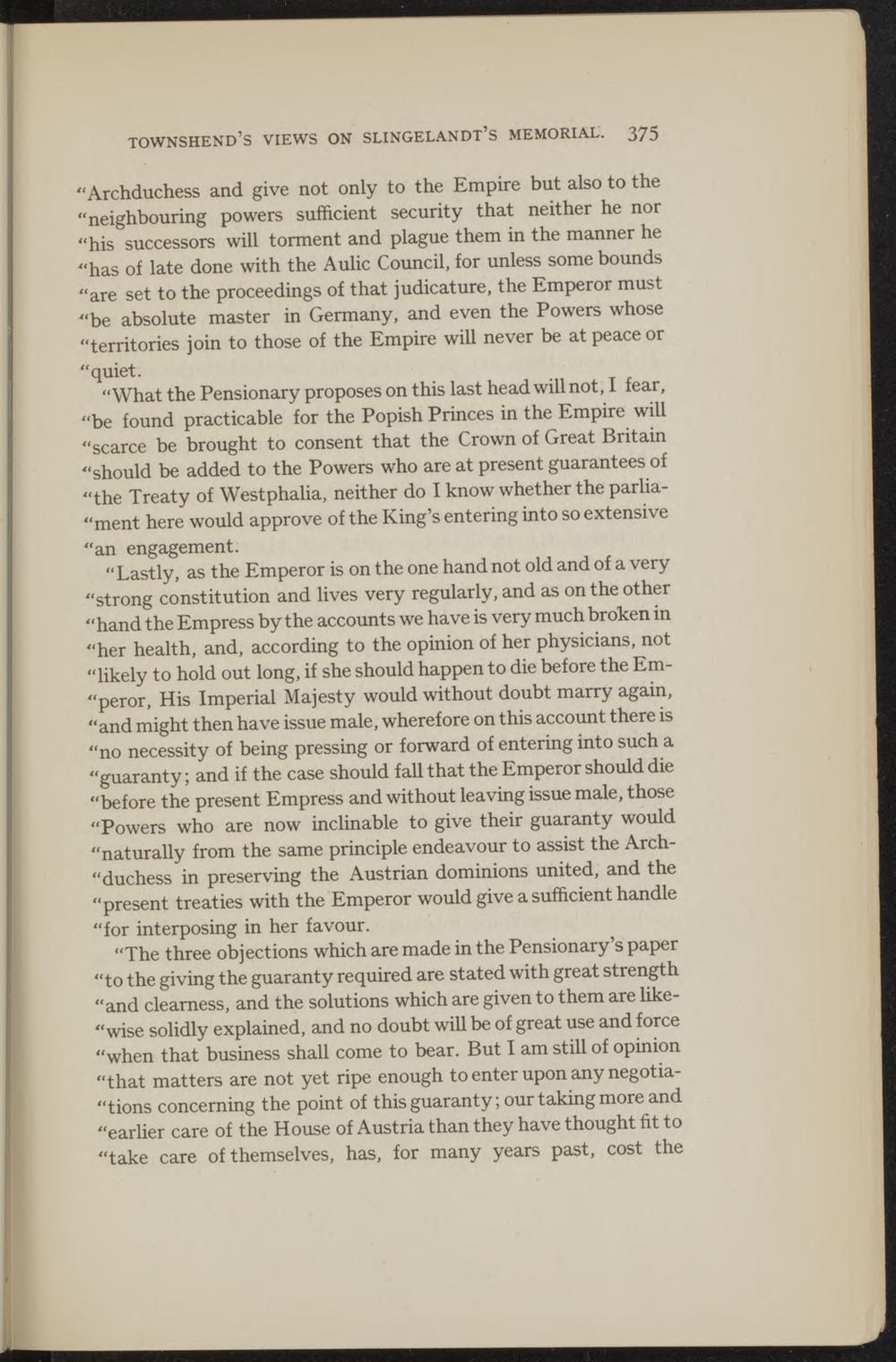 "Archduchess and give not only to the Empire but also to the "neighbouring powers sufficiënt security that neither he nor "his successors will torment and plague them in the manner he "has of late done with the Aulic Council, for unless some bounds "are set to the proceedings of that judicature, the Emperor must "be absolute master in Germany, and even the Powers whose "territories join to those of the Empire will never be at peace or "quiet.

"What the Pensionary proposes on this last head will not, 1 fear, "be found practicable for the Popish Princes in the Empire will "scarce be brought to consent that the Crown of Great Britain "should be added to the Powers who are at present guarantees of "the Treaty of Westphalia, neither do I know whether the parlia"ment here would approve of the King's entering into so extensive

"Lastly, as the Emperor is on the one hand not old and of a very "strong constitution and lives very regularly, and as on the other "hand the Empress by the accounts we have is very much broken in "her health, and, according to the opinion of her physicians, not "likely to hold out long, if she should happen to die bef ore the Em"peror, His Imperial Majesty would without doubt marry again, "and might then have issue male, wherefore on this account there is "no necessity of being pressing or forward of entering into such a "guaranty; and if the case should fall that the Emperor should die "before the present Empress and without leaving issue male, those "Powers who are now inclinable to give their guaranty would "naturally from the same principle endeavour to assist the Arch"duchess in preserving the Austrian dominions united, and the "present treaties with the Emperor would give a sufficiënt handle

"for interposing in her favour.

"The three objections which are made in the Pensionary's paper "to the giving the guaranty required are stated with great strength "and clearness, and the solutions which are given to them are like"wise solidly explained, and no doubt will be of great use and force "when that business shall come to bear. But I am still of opinion "that matters are not yet ripe enough to enter upon any negotia"tions concerning the point of this guaranty; our taking more and "earlier care of the House of Austria than they have thought fit to "take care of themselves, has, for many years past, cost the