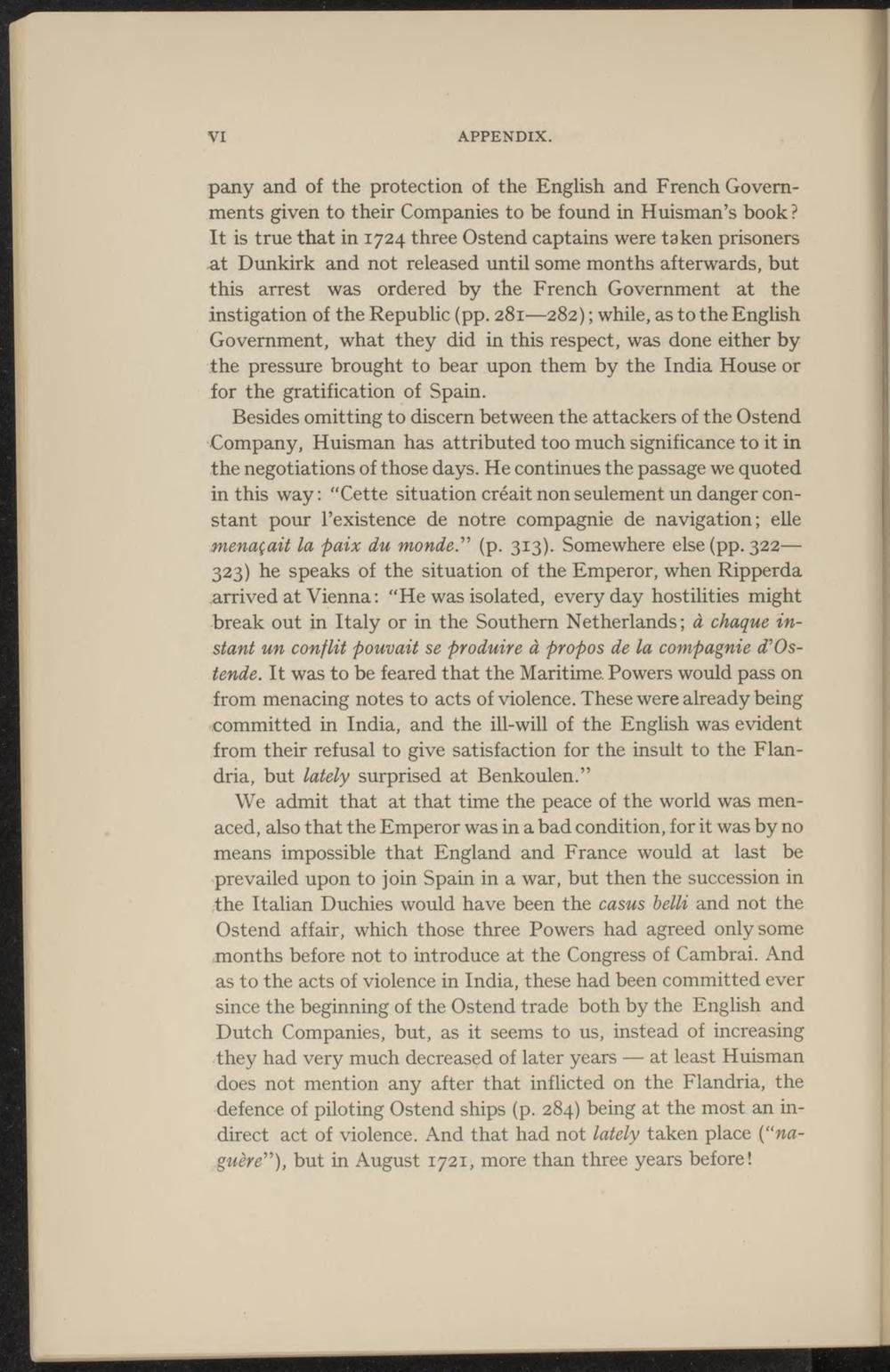 pany and of the protection of the English and French Governments given to their Companies to be found in Huisman's book? It is true that in 1724 three Ostend captains were taken prisoners at Dunkirk and not released until some months afterwards, but this arrest was ordered by the French Government at the instigation of the Republic (pp. 281—282); while, as to the English Government, what they did in this respect, was done either by the pressure brought to bear upon them by the India House or for the gratification of Spain.

Besides omitting to discern between the attackers of the Ostend Company, Huisman has attributed too much significance to it in the negotiations of those days. He continues the passage we quoted in this way: "Cette situation créait non seulement un danger constant pour 1'existence de notre compagnie de navigation; elle mena^ait la paix du monde.'''' (p. 313). Somewhere else (pp. 322— 323) he speaks of the situation of the Emperor, when Ripperda arrived at Vienna: "He was isolated, every day hostilities might break out in Italy or in the Southern Netherlands; a chaque instant un conflit pouvait se produire a propos de la compagnie d'Ostende. It was to be feared that the Maritime. Powers would pass on from menacing notes to acts of violence. These were alreadybeing committed in India, and the ill-will of the English was evident from their refusal to give satisfaction for the insult to the Flandria, but lately surprised at Benkoulen."

We admit that at that time the peace of the world was menaced, also that the Emperor was in a bad condition, for it was by no means impossible that England and France would at last be prevailed upon to join Spain in a war, but then the succession in the Italian Duchies would have been the casus belli and not the Ostend affair, which those three Powers had agreed only some months before not to introducé at the Congress of Cambrai. And as to the acts of violence in India, these had been committed ever since the beginning of the Ostend trade both by the English and Dutch Companies, but, as it seems to us, instead of increasing they had very much decreased of later years — at least Huisman does not mention any after that inflicted on the Flandria, the defence of piloting Ostend ships (p. 284) being at the most an indirect act of violence. And that had not lately taken place ("naguère"), but in August 1721, more than three years before!