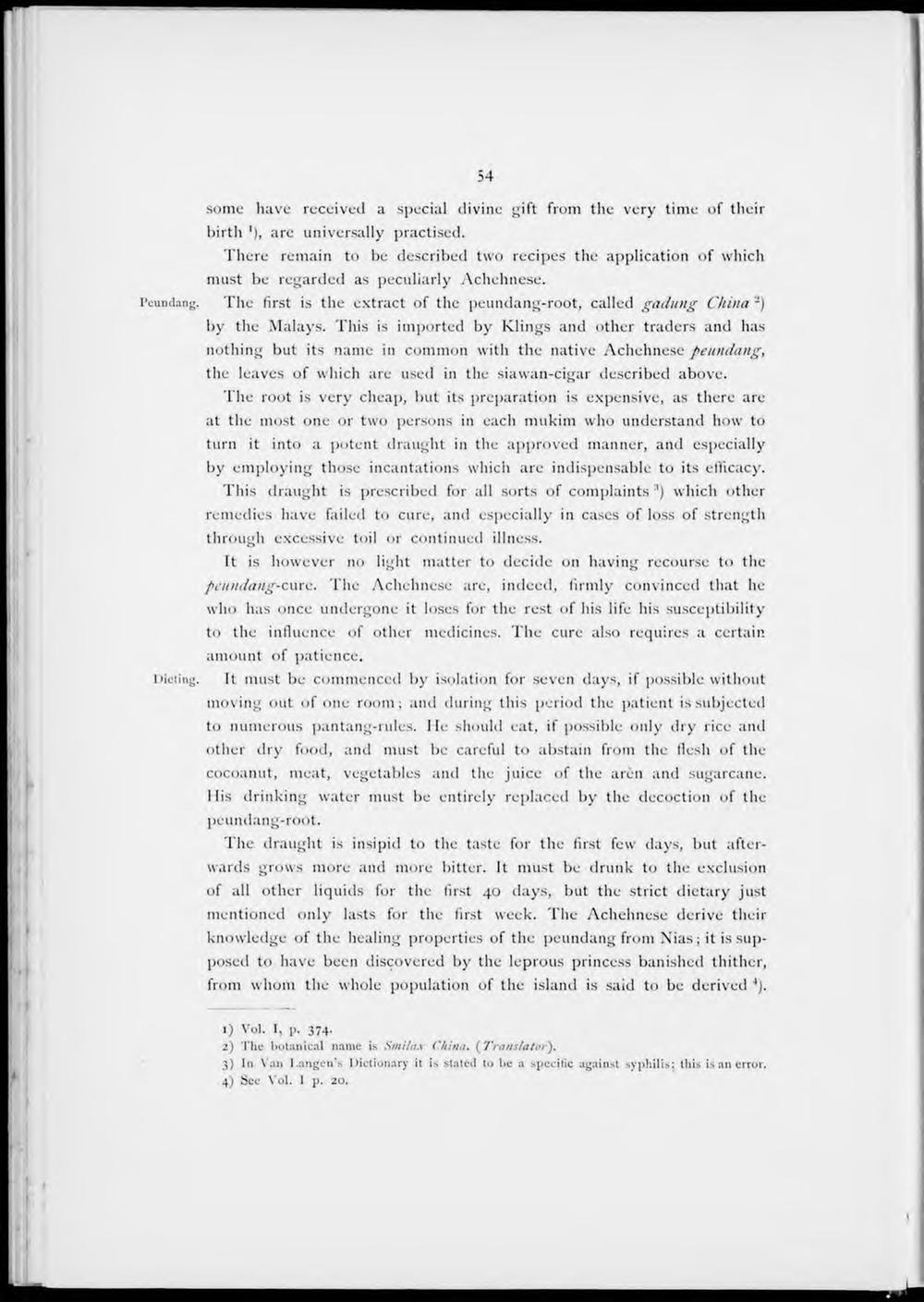 some have received a special divine gift from the very time of their birth '), are universally practised.

There reniain to be described two recipes the application of which must be regarded as peculiarly Achehnese.

Peundang. The first is the extract of the peundang-root, called gadung China 2) by the Malays. This is imported by Klings and other traders and luis nothing but its name in common with the native Achehnese peundang, the leaves of which are used in the siawan-cigar described above.

The root is very cheap, but its preparation is expensive, as there are at the most one or two persons in each mukim who understand how to turn it into a potent draught in the approved manner, and especially by employing those incantations which are indispensable to its efficacy.

This draught is prescribed for all sorts of complaints 3) which other remedies have failed to cure, and especially in cases of loss of strength through excessive toil or continued illness.

It is however no light matter to decide on having recourse to the peundang-cuTc. The Achehnese are, indeed, firmly convinced that he who has once undergone it loses for the rest of his life his susceptibility to the influence of other medicines. The cure also requires a certair. amount of patience.

Dieting. It must be commenced by isolation for seven days, if possible without moving out of one room; and during this period the patiënt is subjected to numerous pantang-rules. He should eat, if possible only dry rice and other dry food, and must be careful to abstain from the flesh of the cocoanut, meat, vegetables and the juice of the arèn and sugarcane. His drinking water must be entirely replaced by the decoction of the peundang-root.

The draught is insipid to the taste for the first few days, but afterwards grows more and more bitter. It must be drunk to the exclusion of all other liquids for the first 40 days, but the strict dietary just mentioned only lasts for the first week. The Achehnese derive their knowledge of the healing propertjes of the peundang from Nias; it is supposed to have been discovered by the leprous princess banished thither, from vvhom the whole population of the island is said to be derived 4).

3) I11 Van I.angen's Dictionary it is stated to be a speciüc against syphilis; this is an error.