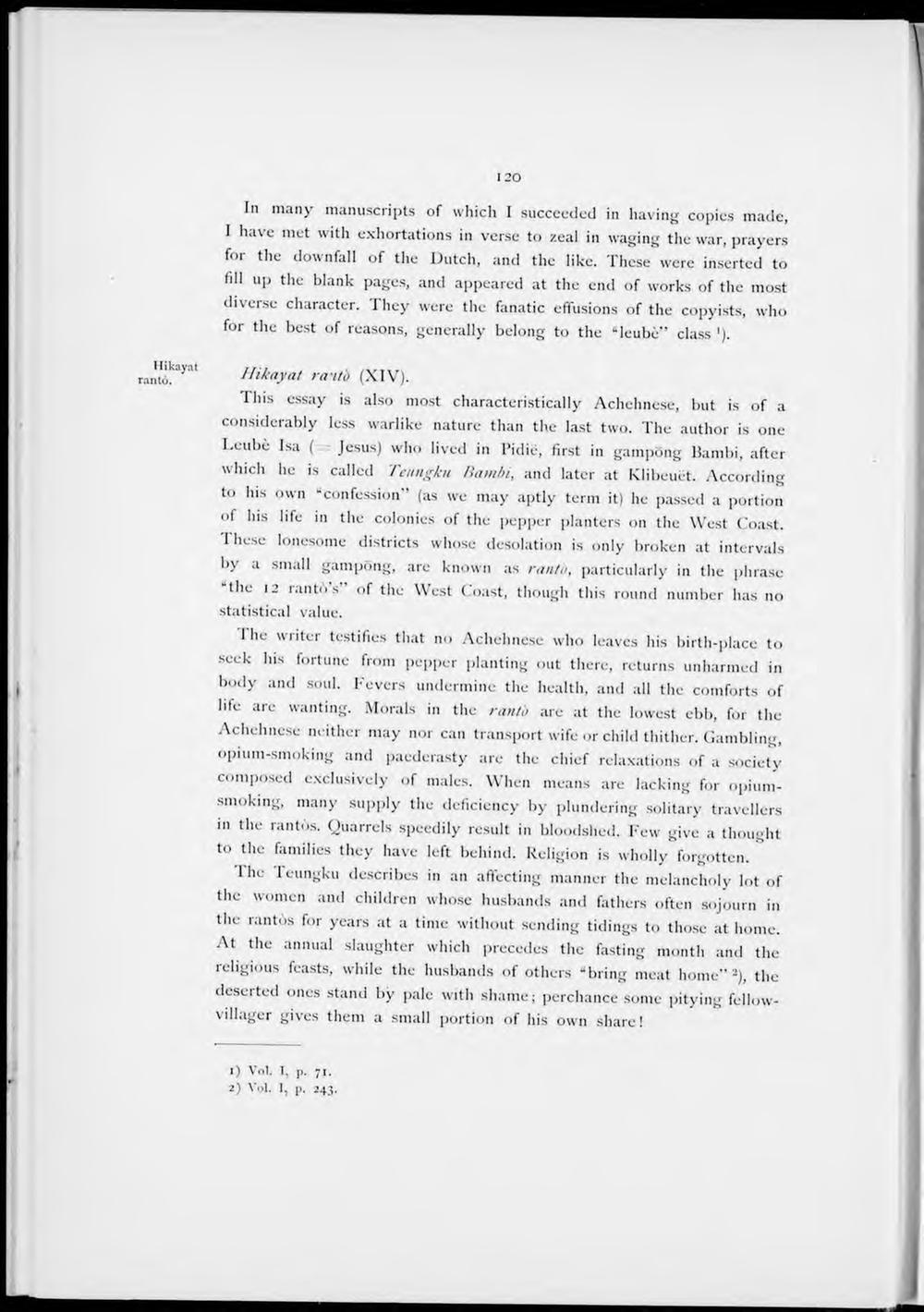 In many manuscripts of which I succeeded in having copies made, I have met with exhortations in verse to zeal in waging the war, prayers for the downfall of the Dutch, and the like. These were inserted to fill up the blank pages, and appeared at the end of works of the most diverse character. I hey were the fanatic eftusions of the copyists, who for the best of reasons, generally belong to the "leubè" class ').

This essay is also most characteristically Achehnese, but is of a considerably less warlike nature than the last two. The author is one Leubè Isa ( Jesus) who lived in Pidië, first in gampöng Bambi, after which he is called Teungku Bambi, and later at Klibeuët. According to his own "confession" (as we may aptly term it) he passed a portion of his life in the colonies of the pepper planters on the West Coast. 1 hese lonesome districts whose desolation is only broken at intervals by a small gampöng, are known as rantb, particularly in the phrase "the 12 rantos" of the West Coast, though this round number has no statistical value.

1 he writer testifies that n<> Achehnese who leaves his birth-place to seek his fortune from pepper planting out there, returns unharmed in body and soul. Kevers undermine the health, and all the comforts of life are wanting. Morals in the rantb are at the lowest ebb, for the Achehnese neither may nor can transport wife or child thither. Gambling, opium-smoking and paederasty are the chief relaxations of a society composed exclusively of males. When means are lacking for opiumsmoking, many supply the deficiency by plundering solitary travellers in the rantos. Quarrels speedily result in bloodshed. Few give a thought to the families they have left behind. Religion is wholly forgotten.

Ihe leungku describes in an afifecting manner the melancholy lot of the women and children whose husbands and fathers often sojourn in the rantos for years at a time without sending tidings to those at home. At the annual slaughter which precedes the fasting month and the religious feasts, while the husbands of others "bring meat home" 2), the deserted ones stand by pale with shame; perchance some pitying fellowvillager gives them a small portion of his own share!