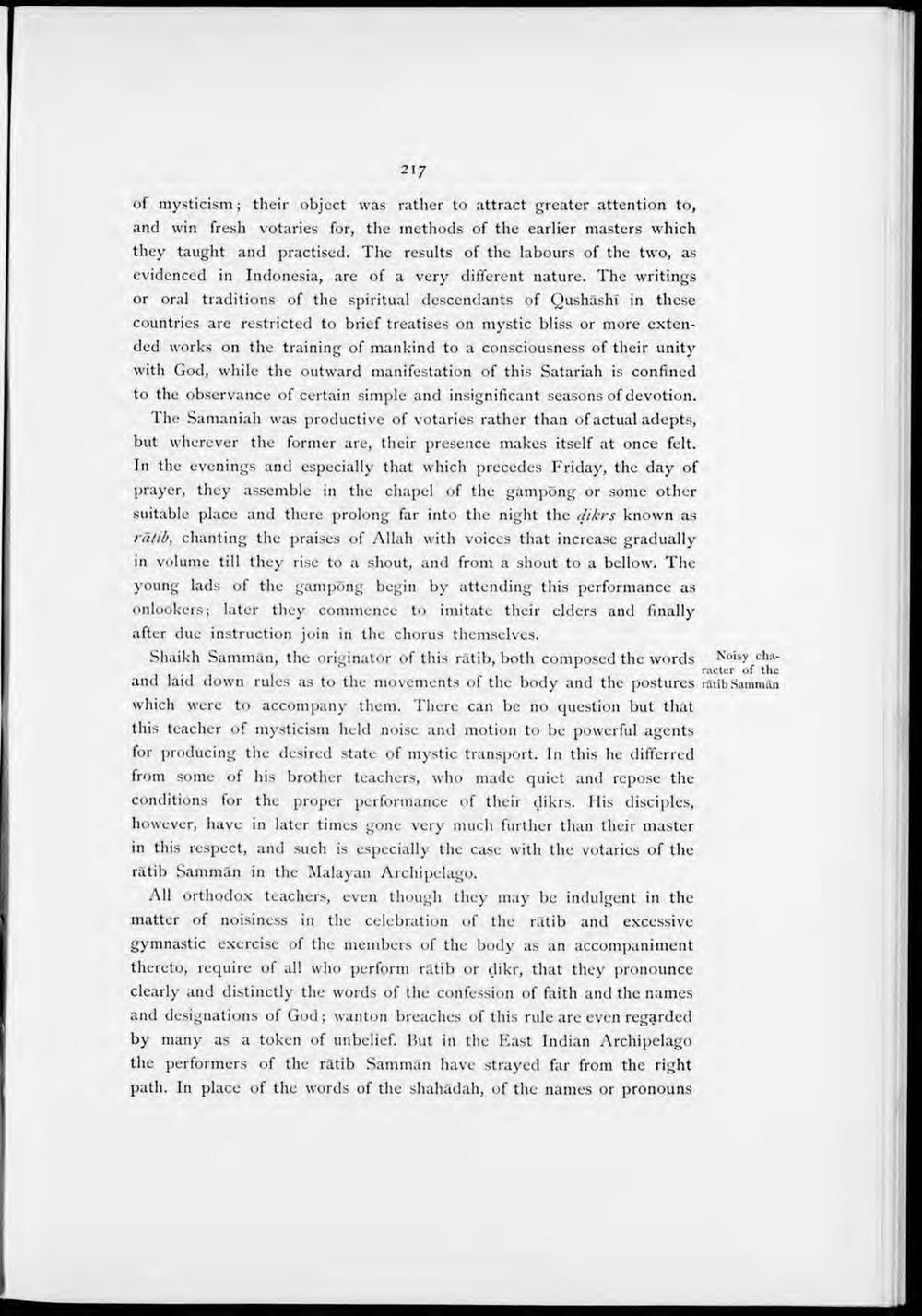 and win fresh votaries for, the inethods of the earlier masters which they taught and practised. The results of the labours of the two, as evidenced in Indonesia, are of a very different nature. The writings or oral traditions of the spiritual descendants of Qushashï in these countries are restricted to brief treatises on mystic bliss or more extended works on the training of mankind to a consciousness of their unity with God, while the outward manifestation of this Satariah is confined to the observance of certain simple and insignificant seasons of devotion.

The Samaniah was productive of votaries rather than of actual adepts, but wherever the former are, their presence makes itself at once feit.

In the evenings and especially tliat which precedes Friday, the day of prayer, they assemble in the chapel of the gampöng or some other suitable place and there prolong far into the night the dikrs known as ratib, chanting the praises of Allah with voices that increase gradually in volume till they rise to a shout, and from a shout to a bellow. The young lads of the gampöng begin by attending this performance as onlookers; later they commence to imitate their elders and finally after due instruction join in the chorus themselves.

Shaikh Samman, the originator of this ratib, both composed the words Noisy cha-

and laid down rules as to the movements of the body and the postures ratib Samman which were to accompany them. There can be no question but that this teacher of mysticism held noise and motion to be powerful agents for producing the desired state of mystic transport. In this he differred from some of his brother teachers, who made quiet and repose the conditions for the proper performance of their dikrs. His disciples,

however, have in later times gone very rnuch further than their master in this respect, and such is especially the case with the votaries of the ratib Samman in the Malayan Archipelago.

All orthodox teachers, even though they may be indulgent in the matter of noisiness in the celebration of the ratib and excessive gymnastic exercise of the members of the body as an accompaniment thereto, require of all who perform ratib or dikr, that they pronounce clearly and distinctly the words of the confession of faith and the names and designations of God; wanton breaches of this rule are even regarded by many as a token of unbelief. But in the East Indian Archipelago the performers of the ratib Samman have strayed far from the right path. In place of the words of the shahadah, of the names or pronouns