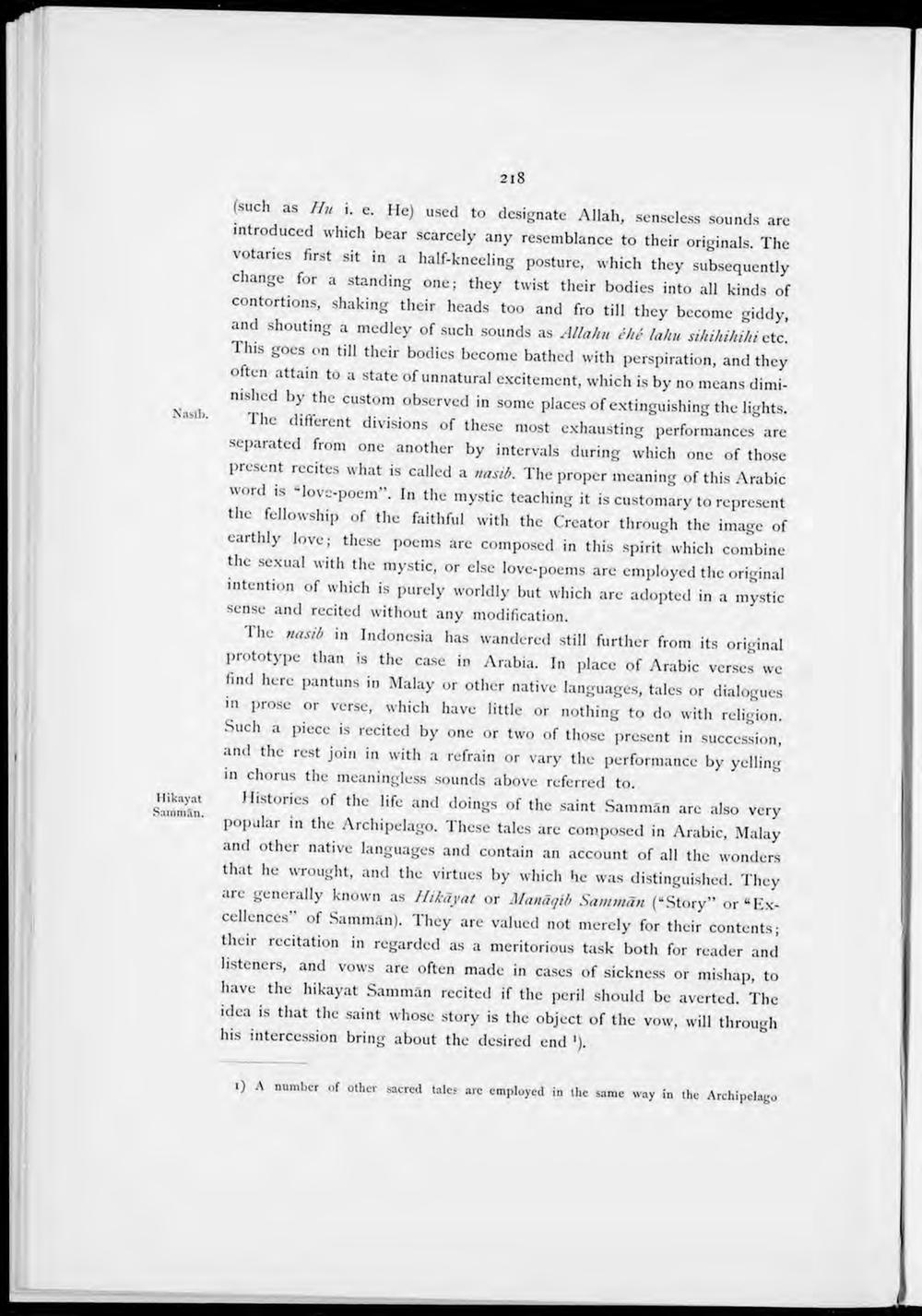 . as Mu '• e- He) used to designate Allah, scnscless sounds are introduced which bcar scarccly any resemblance to their originals. The votaries first sit in a half-kneeling posture, which they subsequently c lange for a standing one; they twist their bodies into all kinds of contortions, shaking their heads too and fro till they become giddy, and shouting a medley of such sounds as Allahu éhê lahu sihiliihihi etc!

lus goes on till their bodies become bathed with perspiration, and they often attain to a state of unnatural excitement, which is by no means dimi-

The different divisions of these most exhausting performances are

separated from one another by intervals during which one of those present recites what is called a nas tb. The proper meaning of this Arabic word is lov„-poem . In the mystic teaching it is customary to represent the fellowship of the faithful with the Creator through the image of earthly love; these poems are composed in this spirit which combine the sexual with the mystic, or else love-poems are employed the original intention of which is purely worldly but which are adopted in a mystic sense and recited without any modification.

The nasib in Indonesia has wandered still further from its original prototype than is the case in Arabia. In place of Arabic verses wc find here pantuns in Malay or other native languages, talcs or dialogues in prose or verse, which have little or nothing to do with religion. Such a piece is recited by one or two of those present in succession, and the rest join in with a refrain or vary the performance by yelling m chorus the meaningless sounds above referred to.

popular in the Archipelago. I hese tales are composed in Arabic, Malay and other native languages and contain an account of all the wonders that he wrought, and thc virtues by which he was distinguished. They are generally known as Hikayat or Manaqib Samman ("Story" or uExcellences" of Samman). They are valued not merely for their contents; their recitation in regarded as a meritorious task botli for reader and hsteners, and vows are often made in cases of sickness or mishap, to have the hikayat Samman recited if thc peril should be averted. The idea is that the saint whose story is the object of the vow, will through his intercession bring about the desired end ').