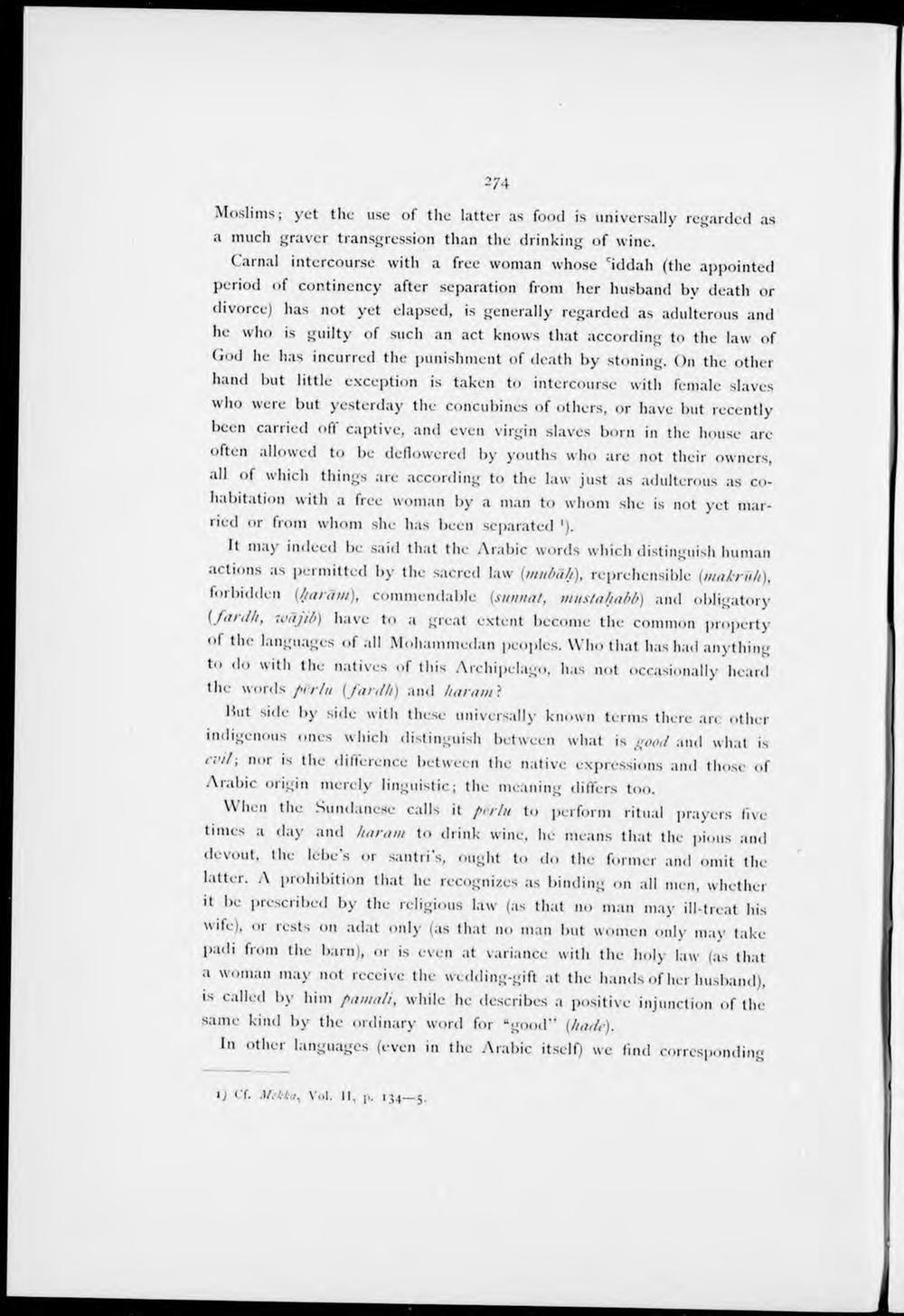 Moslims; yet the use of the latter as foocl is universally regardcd as a much graver transgression than the drinking of wine.

Carnal intercourse vvith a free woman whose ciddah (the appointed period of continency after separation from her husband bv death or divorce) lias not yet elapsed, is generally regarded as adulterous and he who is guilty of such an act knows tliat according to the law of God he lias incurred the punishment of death by stoning. On the other hand hut little exception is taken to intercourse witli feniale slaves who were but yesterday the concubines of others, or have but recently been carried oft captive, and even virgin slaves bom in the house are often allowed to be deflowered by youths who are not their owners, aH °f which things are according to the law just as adulterous as cohabitation with a free woman by a man to whom she is not yet married or from whom she lias been separated ').

It may indeed be said tliat the Arabic words which distinguish liunian actions .is permitted by the sacred law (mufrii/i), reprehensible (tnakrïih), forbidden (/jaram), commendable (suunat, vuistahabb) and obligatory [fat dh, wajil)) have to a great extent become the common property of the languages of all Mohammedan peoples. Who tliat lias had anythiiig to do with the natives of this Archipelago, lias not occasionally heard the words pvvlu (fan/h) and havavi?

Hut side by side with these universally known ternis there are other indigenous ones which distinguish between what is good and what is evil\ nor is the difference between the nativc expressions and those of Arabic origin mcrely linguistic; the meaning differs too.

Whcn the Sundanese calls it pcrlti to perform ritual prayers live times a day and haram to drink wine, he means tliat the pious and devout, the lêbe's or santri's, ought to do the former and omit the latter. A prohibition tliat he recognizes as binding 011 all men, whether it be prescribed by the religious law (as tliat 110 man may ill-treat liis wife), or rests 011 adat only (as tliat 110 man but winnen only may take padi from the barn), or is even at variance with the holy law (as tliat a woman may not receive the wedding-gift at the hands of her husband), is called by him famali, while he describes a positive injunction of the same kind by the ordinary word for "good" [had,-).

In other languages (even in the Arabic itself) we find corresponding