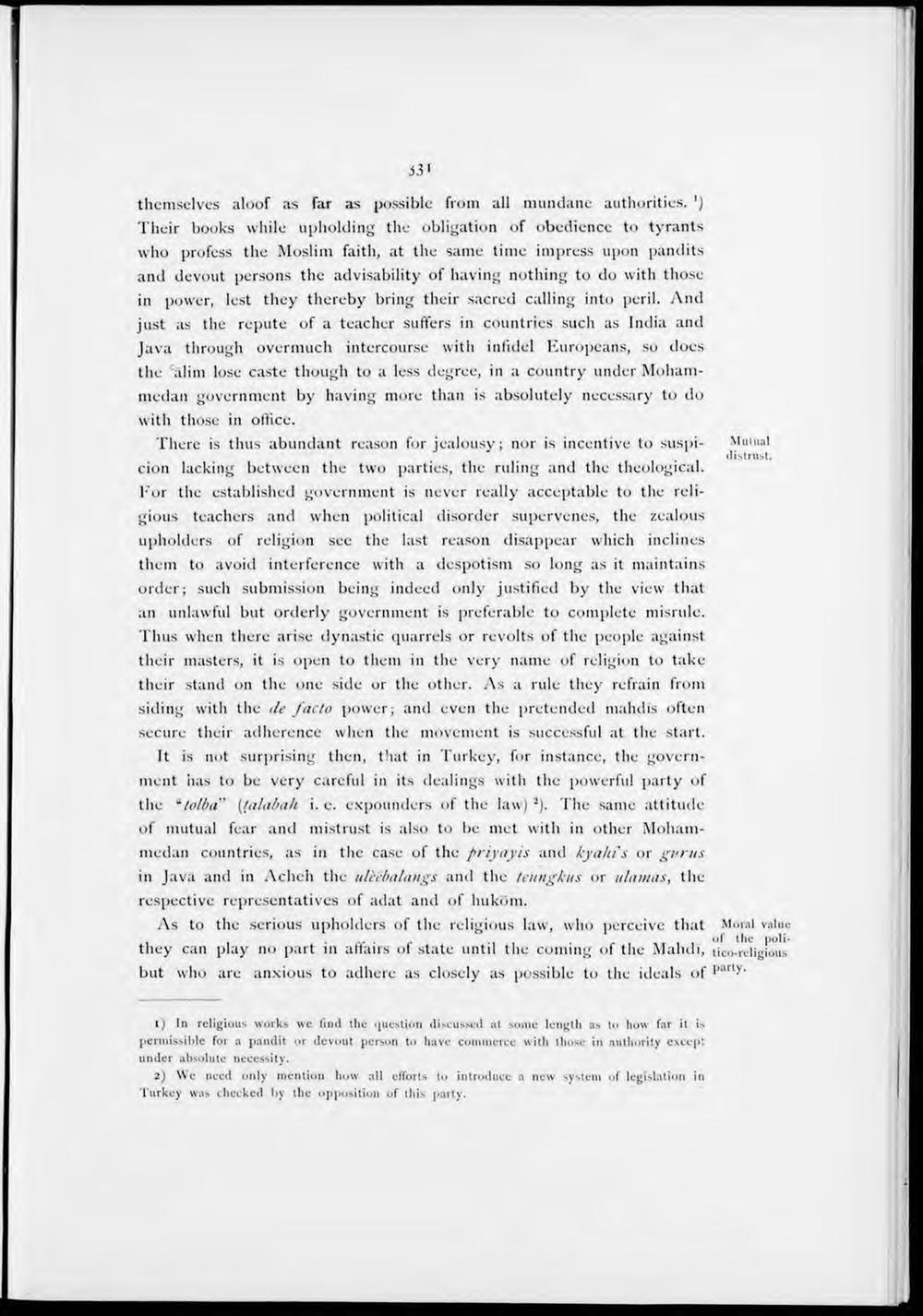 themselves aloof as far as possible fiom all mundane authorities. ')

Their books while upholding the obligation of obediencc to tyrants who profess the Moslim faith, at the same time impress upon pandits and devout persons the advisability of having nothing to do witli those in power, lest they thereby bring their sacred calling into peril. And just as the repute of a teacher suffers in countries such as India and Java through overmuch intercourse with infidel Europeans, so does the calim lose caste though to a less degree, in a country under Mohammedan government by having more than is absolutely necessary to do vvith those in office.

There is thus abundant reason for jealousy; nor is incentive to suspi- Mutual

cion lacking between the two parties, the ruling and the theological.

For the established government is never really acceptable to the religious teachers and when political disorder supervenes, the zealous upholders of religion sec the last reason disappear which inclines them to avoid interference with a despotism so long as it maintains order; such submission being indeed only justified by the view tliat an unlawful but orderly government is preferable to complete misrule.

Thus when there arise dynastie quarrels or revolts of the people against their masters, it is open to them in the very name of religion to take their stand on the one side or the other. As a rule they refrain from siding with the de fado power; and even the pretended mahdïs often secure their adherence when the movement is successful at the start.

It is not surprising tlien, tliat in Turkey, for instance, the government has to be very careful in its dealings with the powerful party of the "tolba" (ta/aba/i i. e. expounders of the law) 2). The same attitude of mutual fear and mistrust is also to be met with in other Mohammedan countries, as in the case of the priyayis and lya/ii's or gvrus in Java and in Acheh the ulecbalangs and the teungkus or ulamas, the respective representatives of adat and of huköm.

As to the serious upholders of the religious law, who perceive tliat Moral value

they eau play nu part in aftairs of state until the coming of the Mahdi, tico-religious but who are anxious to adliere as closely as possible to the ideals of Party-

1) In religious works wc find the question discussed at some length as to hovv far it is permissible for a paadit or devout person to have commerce with those in authority except under absolute necessity.

2) We need only mention how all elTorts to introducé a new systcm of legislation in Turkey was checked by the opposition of this party.