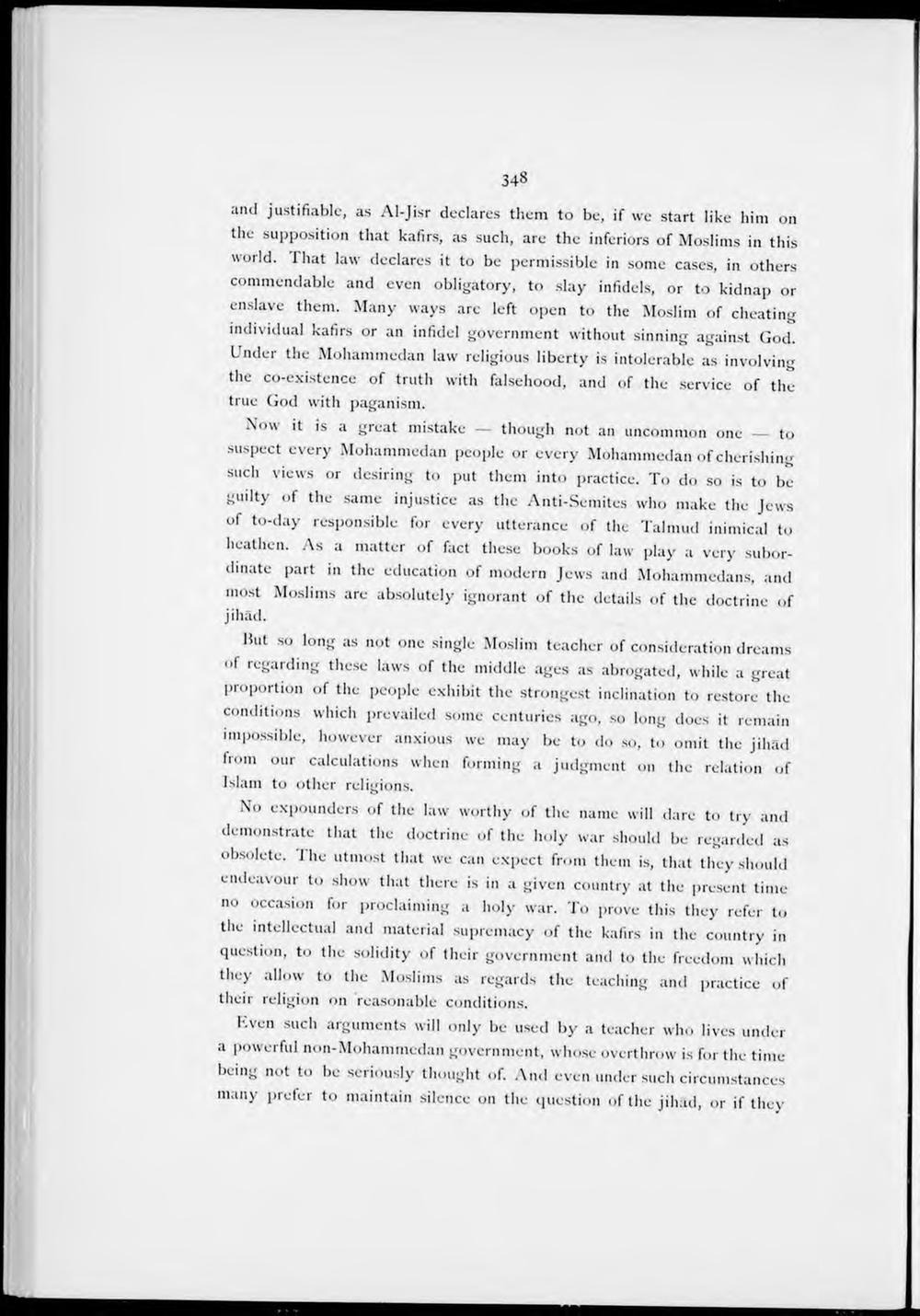 and justihablc, as Al-Jisr declares them to be, if we start like hitn on the supposition that kafirs, as such, are the inferiors of Moslims in this wor'd. 1 hat law declares it to be permissible in some cases, in others commendable and even obligatory, to slay infidels, or to kidnap or enslave them. Many ways are left open to the Moslim of cheating individual kafirs or an infidel government without sinning against God. Under the Mohammedan law religious liberty is intolerable as involving the co-existence of truth with falsehood, and of the service of the true God with paganism.

suspect every Mohammedan people or every Mohammedan of cherishing such views or desiring to put them into practice. To do so is to be guüty <)f the same injustice as the Anti-Semites who make the Jews of to-day responsible for every utterance of the Talmud inimical to heathen. As a matter of fact these books of law play a very subordinate part in the education of modern Jews and Mohammedans, and most Moslims are absolutely ignorant of the details of the doctrine of jihad.

But so long as not one single Moslim teacher of consideration dreams of regarding these laws of the middle ages as abrogated, while a great proportion of the people exhibit the strongest inclination to restore the conditions which prevailed some centuries ago, so long does it remain impossible, however anxious we may be to do so, to omit the jihad from our calculations when forming a judgment 011 the relation of Islam to other religions.

No expounders of the law worthy of the name will darc to try and demonstrate that the doctrine of the holy war should be regarded as obsolete. Ihe utmost that we can expect from them is, that they should endeavour to show that tliere is in a given country at the present time 110 occasion for proclaiming a holy war. To prove this they refer to the intellectual and material supremacy of the kafirs in the country in question, to the sohdity of their government and to the freedom which they allow to the Moslims as regards the teaching and practice of their religion on reasonable conditions.

Even such arguments will only be used by a teacher who lives under a powerful non-Mohammedan government, whose overthrow is for the time being not to be seriously thought of. And even under such circumstances many prefer to maintain silence 011 the question of the jihad, or if they