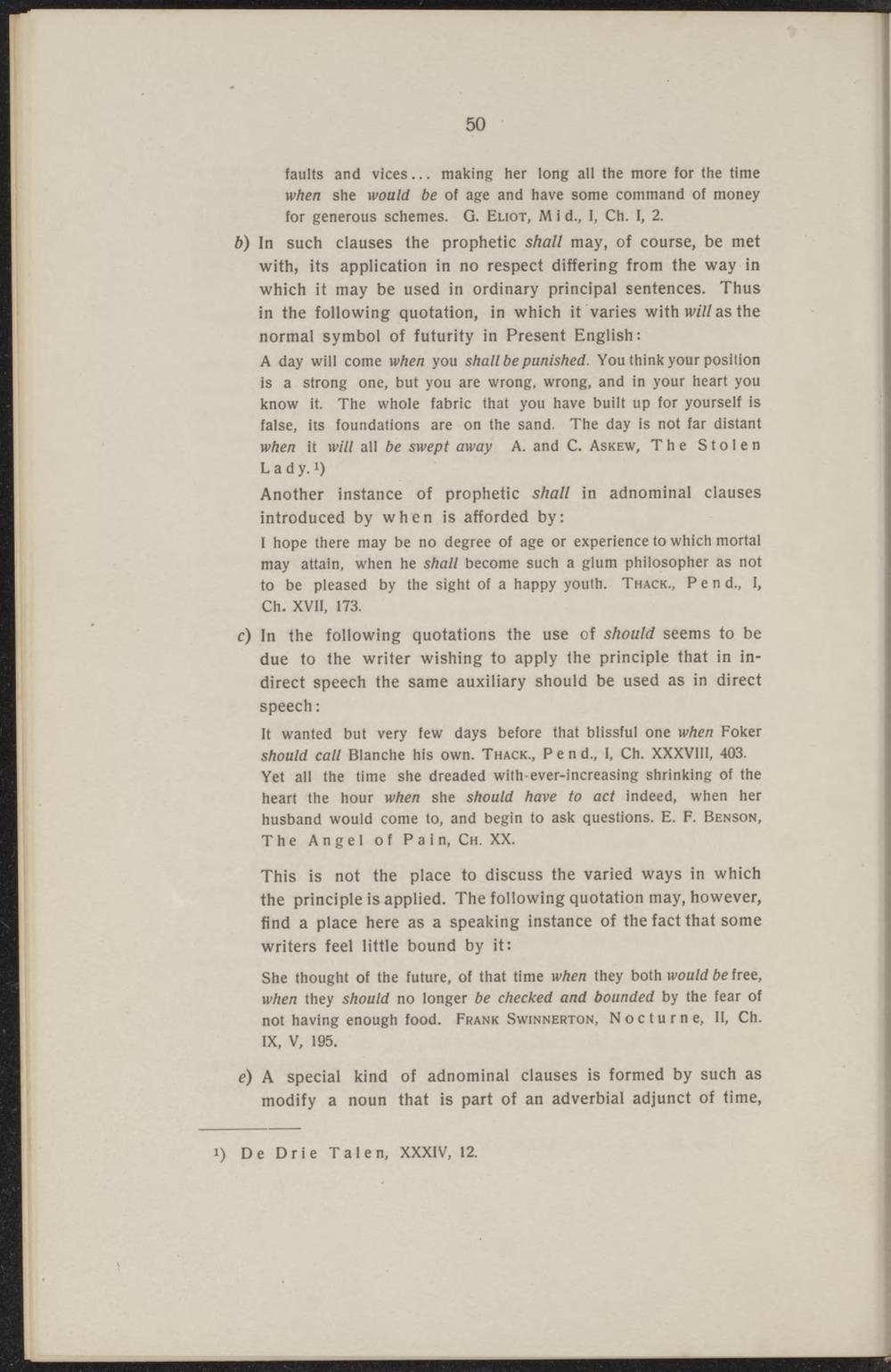 faults and vices... making her long all the more for the time when she would be of age and have some command of money for generous schemes. G. Eliot, M i d, I, Ch. I, 2.

b) In such clauses the prophetic shall may, of course, be met with, its application in no respect differing from the way in which it may be used in ordinary principal sentences. Thus in the following quotation, in which it varies with will as the normal symbol of futurity in Present English:

A day will come when you shall be punished. You think your position is a strong one, but you are wrong, wrong, and in your heart you know it. The whole fabric that you have built up for yourself is false, its foundations are on the sand. The day is not far distant when it will all be swept away A. and C. Askew, The Stolen Lady.1)

Another instance of prophetic shall in adnominal clauses introduced by when is afforded by:

I hope there may be no degree of age or experience to which mortal may attain, when he shall become such a glum philosopher as not to be pleased by the sight of a happy youth. Thack, P e n d, I, Ch. XVII, 173.

c) In the following quotations the use of should seems to be due to the writer wishing to apply the principle that in indirect speech the same auxiliary should be used as in direct speech:

It wanted but very few days before that blissful one when Foker should call Blanche hls own. Thack., Pend, I, Ch. XXXVIII, 403. Yet all the time She dreaded with-ever-increasing shrinking of the heart the hour when she should have to act indeed, when her husband would come to, and begin to ask questions. E. F. Benson, The Angel of P a I n, Ch. XX.

This is not the place to discuss the varied ways in which the principle is applied. The following quotation may, however, find a place here as a speaking instance of the fact that some writers feel little bound by it:

She thought of the future, of that time when they both would be free, when they should no longer be checked and bounded by the fear of not having enough food. Frank Swinnerton, Nocturne, II, Ch. IX, V, 195.

e) A special kind of adnominal clauses is formed by such as modify a noun that is part of an adverbial adjunct of time,