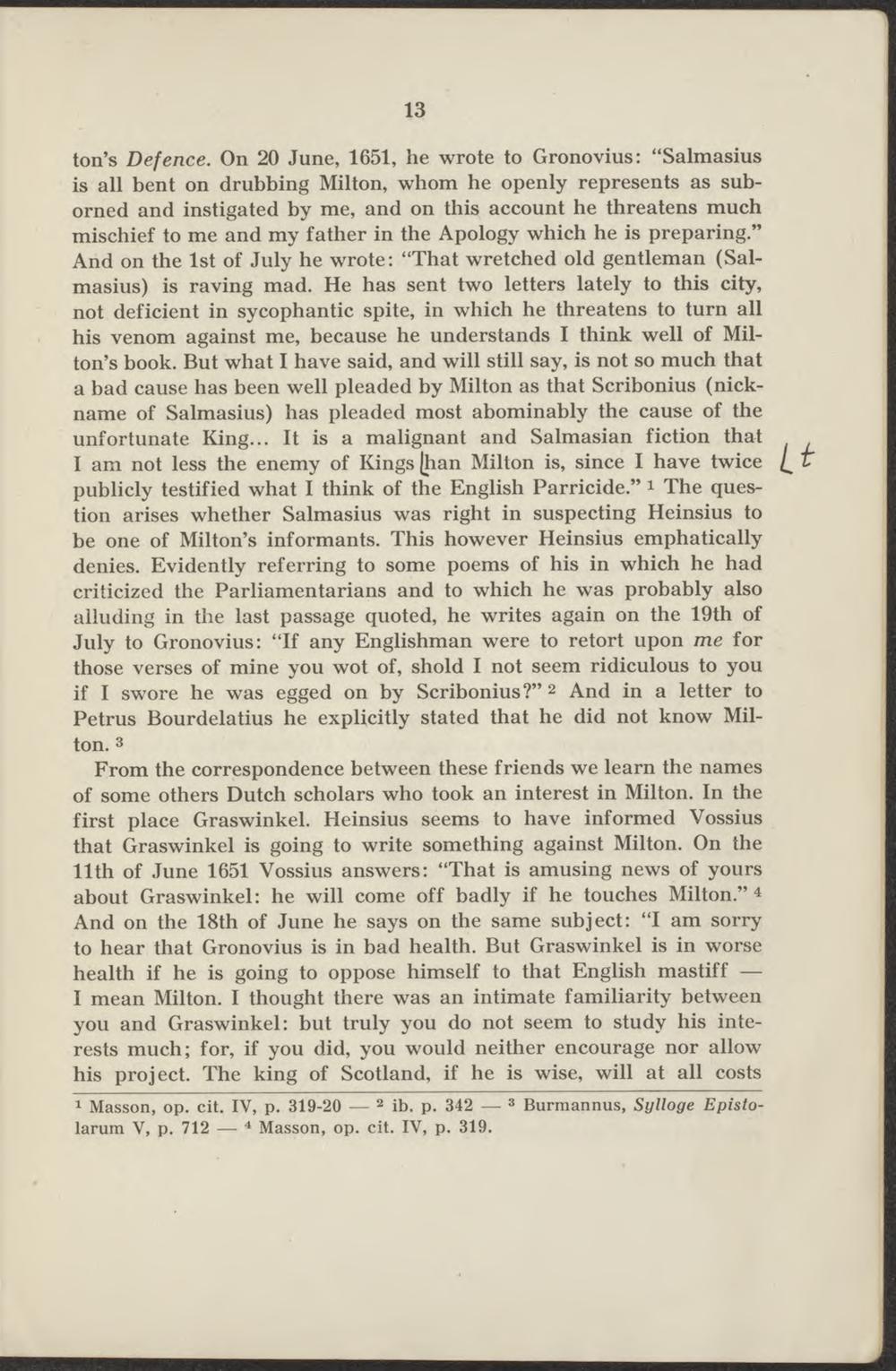 ton's Defence. On 20 June, 1651, he wrote to Gronovius: "Salmasius is all bent on drubbing Milton, whom he openly represents as suborned and instigated by me, and on this^ account he threatens much mischief to me and my father in the Apology which he is preparing." And on the lst of July he wrote: "That wretched old gentleman (Salmasius) is raving mad. He has sent two letters lately to this city, not deficiënt in sycophantic spite, in which he threatens to turn all his venom against me, because he understands I think well of Milton's book. But what I have said, and will still say, is not so much that a bad cause has been well pleaded by Milton as that Scribonius (nickname of Salmasius) has pleaded most abominably the cause of the unfortunate King... It is a malignant and Salmasian fiction that I am not less the enemy of Kingsjhan Milton is, since I have twice publicly testified what I think of the English Parricide." 1 The question arises whether Salmasius was right in suspecting Heinsius to be one of Milton's informants. This however Heinsius emphatically denies. Evidently referring to some poems of his in which he had criticized the Parliamentarians and to which he was probably also alluding in the last passage quoted, he writes again on the 19th of July to Gronovius: "If any Englishman were to retort upon me for those verses of mine you wot of, shold I not seem ridiculous to you if I swore he was egged on by Scribonius?"2 And in a letter to Petrus Bourdelatius he explicitly stated that he did not know Milton. 3

From the correspondence between these friends we learn the names of some others Dutch scholars who took an interest in Milton. In the first place Graswinkel. Heinsius seems to have informed Vossius that Graswinkel is going to write something against Milton. On the llth of June 1651 Vossius answers: "That is amusing news of yours about Graswinkel: he will come off badly if he touches Milton." 4 And on the 18th of June he says on the same subject: "I am sorry to hear that Gronovius is in bad health. But Graswinkel is in worse health if he is going to oppose himself to that English mastiff — I mean Milton. I thought there was an intimate familiarity between you and Graswinkel: but truly you do not seem to study his interests much; for, if you did, you would neither encourage nor allow his project. The king of Scotland, if he is wise, will at all costs