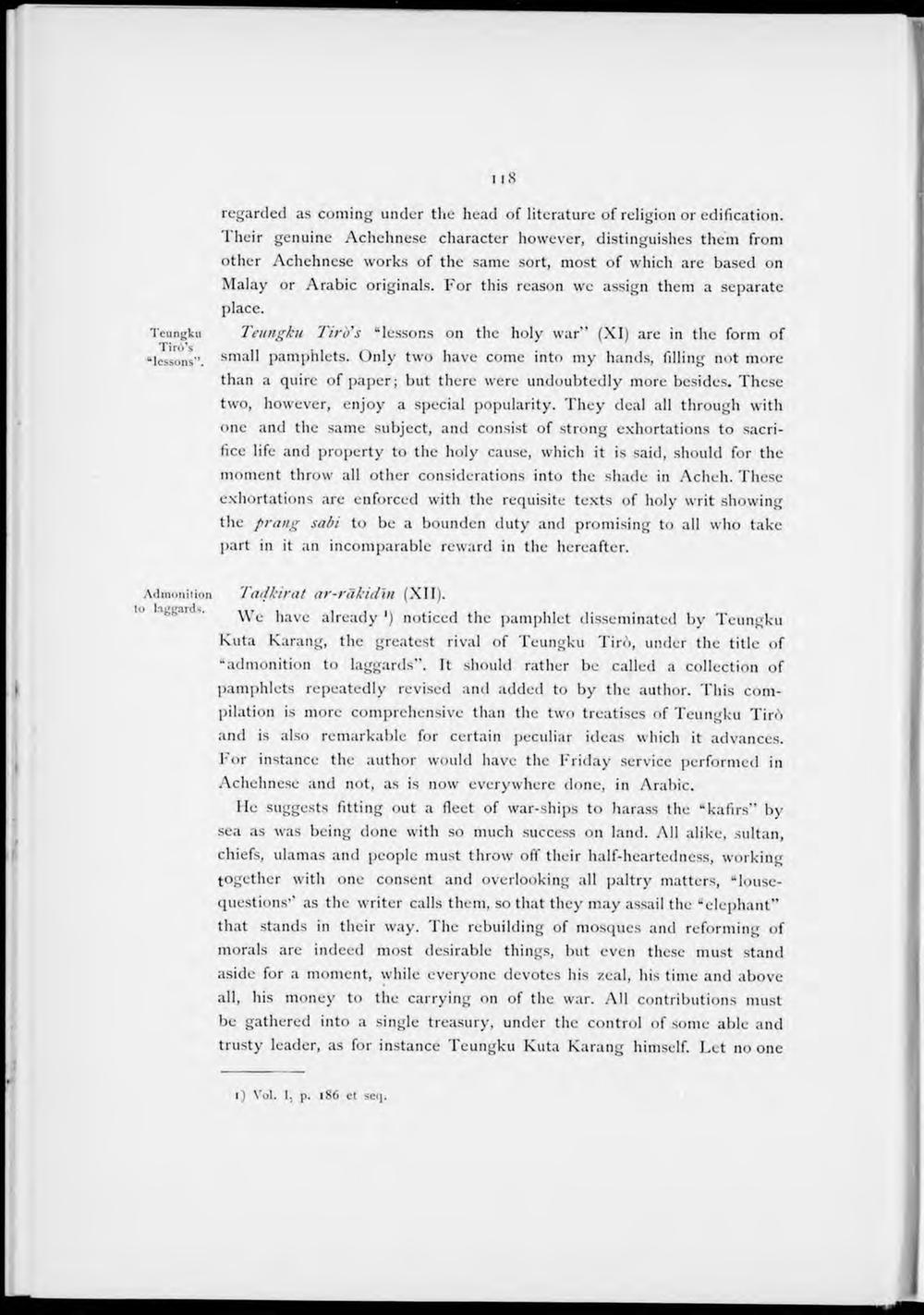 regarded as coming under the head of literature of religion or edification. '1 heir genuine Achehnese character however, distinguishes them from other Achehnese works of the same sort, most of which are based on Malay or Arabic originals. For this reason we assign them a separate place.

Teungku Teungku Tir o s "lessons on the holy war" (XI) are in the form of "lessons". sma" pamphlets. Only two have come into my hands, filling not more than a quire of paper; but there were undoubtedly more besides. These two, however, enjoy a special popularity. They deal all through with one and the same subject, and consist of strong exhortations to sacrifice life and property to the holy cause, which it is said, should for the moment throw all other considerations into the shade in Acheh. These exhortations are enforced with the requisite texts of holy writ showing the prang sabi to be a bounden duty and promising to all who take part in it an incomparable reward in the hereafter.

We have already ') noticed the pamphlet disseminated by Teungku Kuta Karang, the greatest rival of Teungku Tiro, under the title of "admonition to laggards". It should rather be called a collection of pamphlets repeatedly revised and added to by the author. This compilation is more comprehensive than the two treatises of Teungku Tiro and is also remarkable for certain peculiar ideas which it advances. For instance the author would have the Friday service performed in Achehnese and not, as is now everywhere done, in Arabic.

He suggests fitting out a fleet of war-ships to harass the "kafïrs" by sea as was being done with so much success on land. All alike, sultan, chiefs, ulamas and people must throw off their half-heartedness, working together with one consent and overlooking all paltry matters, "lousequestions'' as the writer calls them, so that they may assail the "elephant" that stands in their way. The rebuilding of mosques and reforming of morals are indeed most desirable things, but even these must stand aside for a moment, while everyone devotes his zeal, his time and above all, his money to the carrying on of the war. All contributions must be gathered into a single treasury, under the control of some able and trusty leader, as for instance Teungku Kuta Karang himself. Let no one